In case you wondered

Music composing started as a displacement activity for me. I tried poetry (sucked at it), writing fiction (still enjoy it; won't share it), drawing (semi-sucked), painting (too messy), 3D-modelling and ray-tracing (too hard) and then MIDI composing.

I bought a cheap MIDI keyboard, the Fatar SL-161 (check out this cheezy user manual) and found the Voyetra MIDI orchestrator series of MIDI sequencers (hey, former developers at Voeytra - can you please get back to business?). The usability of this combo allowed effortless music-making. An idea could be captured in that MIDI file as fast as I could play it on the keyboard (and I learned to play fast). Switching between patches was done via the Fatar and MIDI Orchestrator would give me the song overview and the control and adjustment needs I ever needed.

Some fellow students heard the results and I ended up setting up a web server in the student hall together with another student, Fredrik Mörnestedt, who was also composing MIDI at the time. We uploaded some of our songs on Internet. Most of my songs had no title as I churned out song ideas by the tens (I had many exams to dodge at the time). They were simply uploaded as "No names". Some were several minutes long but most were just a few beats, merely song embryos.

I happened to be reading a fantasy novel series called "Wheel of Times" by Robert Jordan at the time so the songs that I did name were inspired by events in the books. Since Fredrik also enjoyed the series we ended up buying a domain and rename our site "WOT Hymns" (wothymns.com).

Suddenly I started to get feedback, via e-mail, from all over the world. These wonderful people not only suggested song titles but shared lyrics they had been writing for my songs. The titles and lyrics captured events and the atmosphere in the series perfectly, in a way I would never have managed myself (hey, if you were one of them contributing, please let me know and I will give you the recognition and credits you deserve).

The original sound card I had in my computer was replaced with a Sound Blaster AWE 32 from Creative labs. It made a difference (on my side of the process) but it also made me crave for more. With the purchase of the cute but super usable multi-timbral Alesis Nanosynth I had started on my slippery slope to equipment hell and slow choking of creativity. At the time I did not know it of course and the Fatar + Voyetra + Nanosynth combo was still not putting anything in between my brain and the MIDI file. But recording became a thing when I had to route back the generated sound from the now external hardware synth into my sound card. I had to mix tracks and this added new steps into the process. At some point I was using an old 4-channel Portastudio and some duct tape.

People kept contributing but now also asking for permission to use the music for various things. I knew it was used as background music when reading the series but also when playing board games and then D&D. But now they asked for the permission to use it on their WoT-related pages covering subplots, poetry and art-work. Which I of course granted. This was also how I found out that Fredrik and I were not the only amateur MIDI composer of WoT-inspired music. There were others, like those of Qirien Dhaela and Erica Sadun. I started searching the web (what you would refer to as "google" today) and found the music being mentioned here and there. And then the music found an even broader use when it was played on local radio stations.

I kept composing while also managing my studies at the university and doing the things students do and parents never find out about. I met my wife-to-be via the Internet and compensated my total lack of flirting skills by composing some songs to her. They are still my own favourites.

Fast forward to 1999 and my music career that had started in 1996 was already in decline. The visitor count per day at wothymns.com was dwindling. Probably because we did not upload much any longer. The exams were soon gone and so was the motivation. Fredrik and I decided to shut down the site and release the domain. I uploaded my songs on MySpace instead (where they remained until a few years ago when someone did not get his/her much needed morning coffee and wasted it all - or they needed the disk space).

A game developer (and later creative director) of a game called 'Roblox' (I had a glance at game, looked fun) contacted me and asked for permission to use it. I granted. Some other game developers and producers of multimedia projects also asked. Granted.

But nothing could ignite the spark again. I tried to buy equipment (trying the slippery slope). First the fabulous Fatar SL-880 that I still have today (which is probably as close as I will ever get the feeling of my own grand piano). Then a Roland JV-1010 that added a ton of patches but made music-making harder, especially since I wanted to stick to GM or GS (to be able to share the source MIDI) and could hence not make use of the scores of fantastic patches that the Roland had. The GEM RP-X was a beauty, though (if I just close my eyes I can now both feel and hear the grand piano). But alas, nothing helped.

Jump to 2018 and almost 20 years since I composed my last song. I uploaded the song "Metal Trees and Glass flowers" on Spotify and other streaming sites. Just for fun but mostly to embarrass my kids (succeeded, thank you). So, if you want to make me rich, go look for it on music streaming site of your choice. I plan on collecting my first pennie around 2050 or so.

Fast forward again to 2021 and I find out that my music is still out there on the Internet. But the songs are sometimes renamed and associated with other composers. Not for malicious reasons but simply due to the oblivion of history. I decided to create a new site and upload my music again, for easy finding and sharing of my music.

So here we are again. We will see about that visitor count... 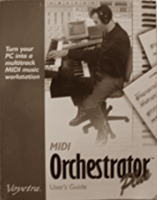